According to masked activists of “Ultras Aqsawi” Team, Vendetta mask symbolizes revolution and resilience, and their participation comes to support Hamas Movement against all challenges and conspiracies.

They also want to emphasized that revolution and resistance are the only way to liberate Palestine from the Israeli occupation.

Team member, Mahmoud Bassam, said that the team was formed six months ago in Rafah, southern Gaza Strip and has more than 500 members today.

The Ultras cheers during the Hamas festival are for Palestinian rights and constant, and in support of the steadfastness of the besieged Gaza, he explained.

Vendetta mask has had widespread popularity across the Arab countries during the “Arab Spring” revolutions, which made it an icon for resisting dictatorships.

Back in history, Vendetta mask dates back to the time when Jay Fox, who rebelled against the British monarchy and attempted to bomb the English parliament building in 1606 assisted by other rebels who wore masks. However their plan failed and Fox was executed.

In 2005, famous director James Mktejo had one of his ‘V for Vandetta’ movie cast acting as rebel Fox.

Moreover, 'Anonymous' hacking group believed to be pro-Palestinian uses this mask when making cyber attacks against the Israeli occupation.

Vendetta is originally an Italian word that means revenge. 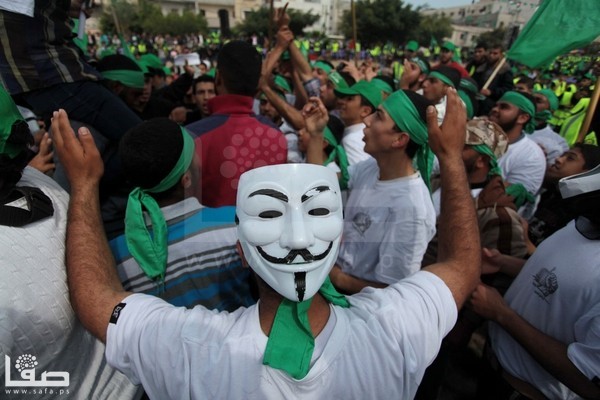