Gaza, ALRAY - A national committee has staged a sit-in near the Rafah border gate in northern Gaza Strip to protest the 7-year-long blockade of the enclave.

“National Committee to Lift the Siege” organized the sit-in which is aimed to draw attention to the closure of the Rafah crossing and the Israel’s imposed noose around the strip, Sami al-Amassi, a spokesman for the  committee, told ALRAY.

The sit-in events shall span over the current week and may be extended for the next week, he added.

Hamas MP Salah Bardawil demanded the UN to assume their legal and moral responsibility to fully lift the blockade, calling on the Security Council and the UN General Assembly, and UN Human Rights Council to hold special meetings on the blockade of Gaza.

“We appeal to the Arab parliaments to lobby on their governments for suing the Israeli occupation’s political and military leadership for committing the crime of blockade against the Palestinians in the Gaza Strip,” he added.

Gaza has been under an extreme economic blockade since 2007. Israel since was allowing limited quantities of construction supplies destined for international projects.

The smuggling tunnels which Gazans were forced to rely on for their needs mainly of building material and fuels were semi-completely destroyed following Egyptian military’s disposition of president Morsi in July 2013.

The Egyptian authorities open the Rafah crossing only for two loose days on a 10-day basis since recent times.

Ministry of Interior has been closing applications for travel for over a month so far after the number of applications reached 5000. 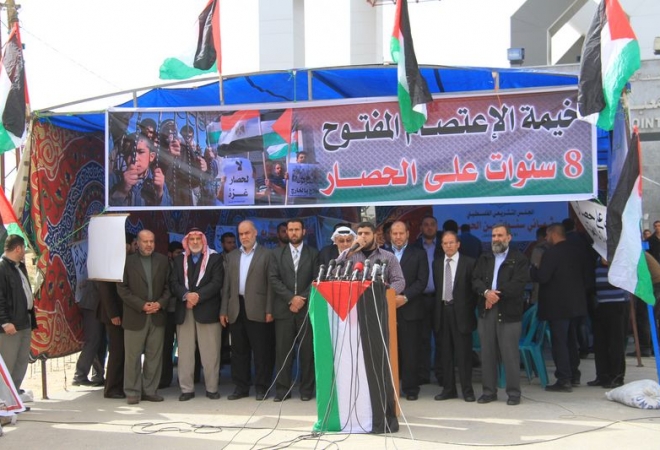